Short history of freediving – the magic of the deepest blue

Freediving is a form of diving underwater, without the help of a breathing apparatus, but by holding one’s breath. What is this that makes it so unique and intriguing though? Is it the sense of complete calm that the depths give us, the peace and harmony we get in the water, the unity with ourselves or the suspense and ecstasy of struggling to cross our human boundaries? One thing is for sure, that all this begun as an effort to cover basic needs, to explore further for resources – in the deep waters this time, or even to defend.

The first people ever noted to freedive were living 7000 to 10000 years ago on the coast of the Baltic Sea. Seashell fossils found in their area led to naming them “The Clam Eaters”, implying that they were diving in pursuit of food.

More references are found later on in scripts and artifacts coming from Ancient Greece. The Minoan civilization was apparently using figures of seashells, as well as colour produced by them, in order to decorate ceramic art. Traces can be found also in Homer’s Iliad, where the fall of Hector is compared to the dive of a diver in the water, but also in the writings of several historians of the time, such as Herodotus, Thucydides, Plutarch, where freediving was used as tactics during naval combats or in order to retrieve valuables from shipwrecks in the depths. Diving for sponges, which is also mentioned by Homer and Plato, was and still is a well-known activity – especially in the island of Kalymnos.

In the Japanese anthology of poetry “Man’yoshu”, another very interesting case of freediving is mentioned, this of the Ama pearl divers or women of the sea. They were diving as deep as 30 feet down to collect seaweed and shellfish, gaining a bonus every time they would collect a pearl – something that later on got integrated in the business world and is forming up to now a touristic attraction in Japan. The exact same activity and culture can be noticed amongst the Korean women as well, who are called Haenyo divers.

In 1913, Stathis Hatzis a sponge diver and fisherman from the island of Symi, accomplished what was considered as impossible, he dived 76 meters below the surface of water, recollected the anchor of the Italian battleship Regina Margherita and secured it back in place. His effort lasted 3 minutes and it is the first -ever- recorded freedive.

In the next years, a few notable names took part in the fast evolution of free-diving as a sport, by setting and breaking records, making the world underneath the surface of the sea look like an ideal place for competition and overcoming of the challenge of death, by using techniques and natural physiology responses like diving reflex, blood shift, blood cooling and others.

Officially, Raimondo Bucher was the first man to ever reach the depth of -30 meters in 1949 but once rivalries started taking place his record became part of the past. Enzo Maiorca and Jacques Mayol were the protagonists of the next three decades, reaching the -101 meters and -105 meters respectively. After them, Francisco Pipin Ferreras and Umberto Pelizzari dominate the deep waters. Ferreras reaches the -128 meters in 1995 but in 1999 Pelizzari’s dive of -150 meters proclaims him the “Deepest Man”. Karoline Meyer (Brazil) made the first world record inside a competition on 1999, making history to the modern freediving and broken for the first time the 6’00 barrier (Red Sea Dive Off AIDA).

It was in the sixties that women first appeared in the adventurous world of freediving as a sport, breaking records. Francesca Trombi, Hedy Roessler and Giuliana Treleani were the leading freediving figures of this decade with Giuliana reaching in the end the -31 meters in 1965. During the eighties, both daughters of Enzo Maiorca, Rossana and Patricia, followed their father’s passion and made it to -80 and -70 meters respectively, while Angela Bandini put aside everybody else by diving in -107 meters. 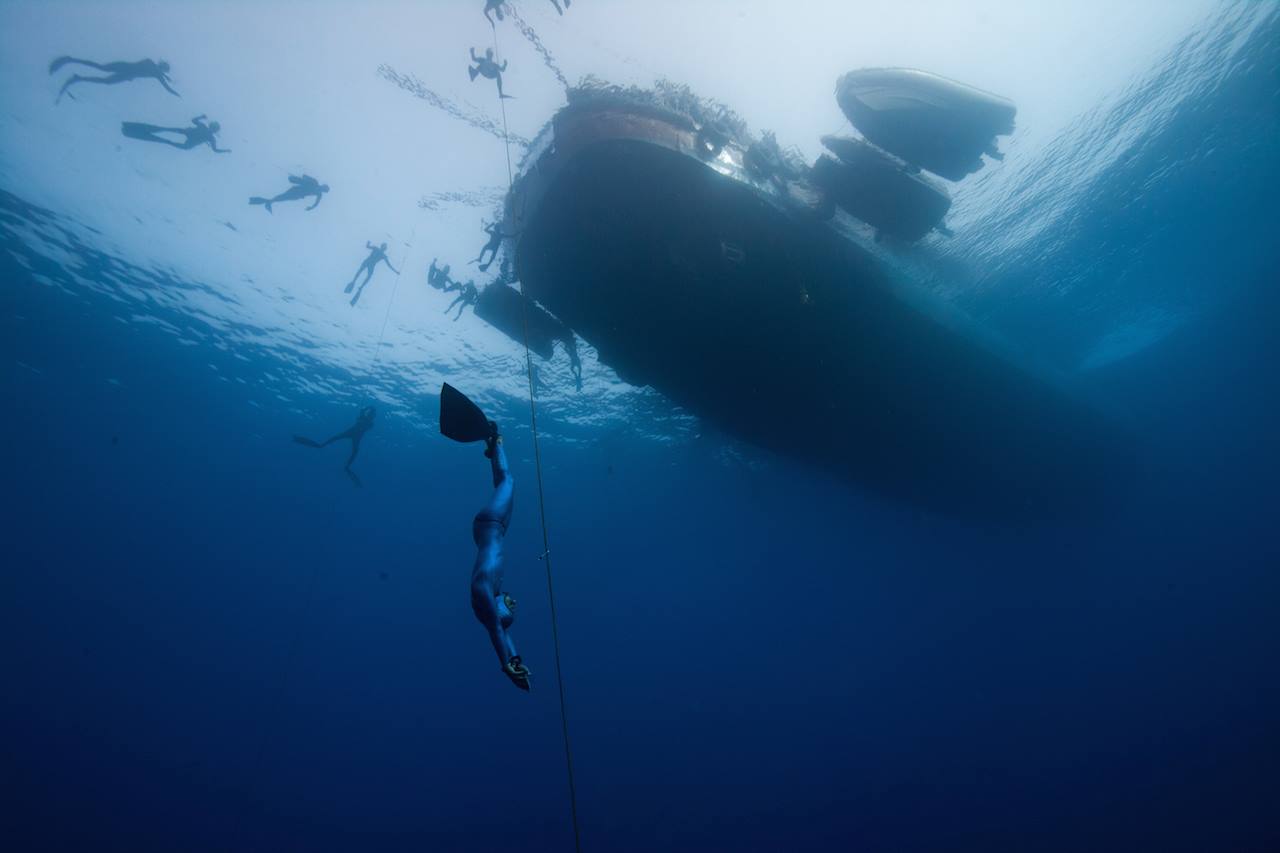 It was in 1992 that the International Association for the Development of Apnea was founded and along with Confédération Mondiale des Activités Subaquatiques, formed in 1959, they set the standards, recognize the disciplines and verify the records.

Francisco Pipin Ferreras is back to break his rival’s record by diving in -162 meters in 2000, while his wife, Audrey Mestre beats his record two years later, by reaching the depth of -171 meters and – unfortunately- never making it back to the surface due to a tragic accident. Patrick Musimu dives down to 209.6 meters in 2005 but Herbert Nitsch hits the non-breakable record of 214 meters in the summer of 2007.

Nobody surpassed this limit after him but freediving gains more and more passionate followers every year that are willing to risk their lives in order to meet the beauty of the deepest waters.

Where Art dives in

Apart from the art of the Minoans and Egyptians, decorated with treasures of the depths, diving and the magic of the deep sea gained the interest of many artists through the ages.

Leonardo Da Vinci designed his own diving apparatus and his unique innovative vision of an underwater gear was revisited and modified later by William James and afterwards by Emile Gagnon and Jacques Cousteau.

The Ama japanese mermaids, mentioned above, were a source of inspiration for many artists. Photographer Yoshiyuki Iwase preserved their images through time but even before him, the Amas were depicted in works of art by Utagawa Kuniyoshi. Documentaries and feauture films are produced ever since around the challenging life of the Ama women.

In the western culture, the most noted film is definitely “The Big Blue” by Luc Besson, depicting the relationship of Jacques Mayol and Enzo Maiorca, accompanied by the stunning music of Eric Serra.

Freediving or even further, men being able to live underwater is a common leitmotiv and inspiration for creativity. From films and photography to novels, in a realistic sense or in the shape of science-fiction, the amphibious model of humans will always be a recurrent theme and dream-to-catch.

So, what would make you take the challenge and dive?